Studying and training in France

French Education is regulated by the Ministry of National Education (called « Ministère de l’Éducation nationale, de l’enseignement supérieur et de la recherche »). Even if education is compulsory between the ages of 6 and 16 (law of the 28 March 1882), France has a long tradition of pre-primary education, most children go to school since the age of 3.

State-run primary schools in France are free, secular, and co-ed, and parents only need to pay for lunches, after-school care, and class outings.

The French education system is organised into four levels of education :

Education in collèges is compulsory and common to all pupils since 1975. The end of the lower secondary education is sanctioned by the Diplôme national du brevet even if admission to upper secondary level is not conditional upon success in the « brevet ».

The Common Core of Knowledge and Skills

Nursery school, elementary school and lower secondary education have the goal to allow children to acquire the Common Core of Knowledge and Skills (Socle commun de connaissances et de compétences). It is based on the recommendation of the European Parliament and the European Council on « key competences for education and lifelong learning ».

It is organised aroud seven key competences. According to the ministery, each of these is intended « to be a combination of basic knowledge, skilles to be uses in various contexts and essential attitudes throughout life ».

The seven key competences are :

1. command of the French language ;
2. proficiency in a modern foreign language ;
3. the key elements of mathematics, scientific culture and technology ;
4. mastery of ordinary information and communication skills ;
5. humanist culture ;
6. social and civic skills ;
7. autonomy and initiative.

Lower secondary schools take all pupils from elementary school without an entrance exam from the age of 11.
Its primary objective is to help all to master the Common Core of Knowledge and Skills. It also prepares pupils for the rest of their general, technological or vocational schooling.

To access to the general and technological route and prepare a « baccalauréat » exam, pupils attend a « Seconde générale et technologique », then, at the end of the year, they chose between the general or the technological path. Since 2021, at the end of their first year (seconde), students will still have mandatory classes in core subjects, such as French, history, geography, foreign languages, sport, philosophy, and science. However, they will have to choose three specialties (such as physical education, arts, social and economic studies) to better adapt their curriculum to their interests. They will then drop one of these elective subjects in their final year. This new baccalauréat reform also places more emphasis on continuous evaluation and less importance on the final examination.

And there are six technological baccalaureate :

The vocational route « enables pupils to learn a trade by gradually moving from the school environment to the world of work in particular through dual training courses with some time spent in the workplace and other periods at school. These diplomas can be prepared through schooling at a vocational high school or through an apprenticeship in a Centre de Formation pour Apprentis (CFA – apprenticeship training centre). 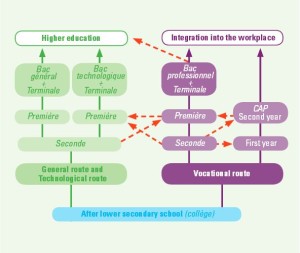 A presentation of the « Campus d’excellence » (Hubs for vocational education and training excellence) : 2020_campus-metiers-qualifications

This website uses cookies to improve your experience while you navigate through the website. Out of these, the cookies that are categorized as necessary are stored on your browser as they are essential for the working of basic functionalities of the website. We also use third-party cookies that help us analyze and understand how you use this website. These cookies will be stored in your browser only with your consent. You also have the option to opt-out of these cookies. But opting out of some of these cookies may affect your browsing experience.
Necessary Toujours activé
Necessary cookies are absolutely essential for the website to function properly. This category only includes cookies that ensures basic functionalities and security features of the website. These cookies do not store any personal information.
Non-necessary
Any cookies that may not be particularly necessary for the website to function and is used specifically to collect user personal data via analytics, ads, other embedded contents are termed as non-necessary cookies. It is mandatory to procure user consent prior to running these cookies on your website.
Enregistrer & appliquer
Faire défiler vers le haut